Hi. Hello. Good day. Were you having a good day? Well, it’s about to be a MONUMENTAL day.

That is, if you have not yet been introduced to the music genius that is Jack Garratt.

I recently had the pleasure of being enlightened by my dear friend, Katie, whom I lovingly refer to as “Laz” (a shortening of her last name) or my “black swan” (you will notice this is how she is saved in my phone in the following text conversation. This has nothing to do with her actually backstabbing me in any way, a la Mila Kunis and that shard of mirror glass. It’s just a fun, light-hearted way for girlfriends to poke fun at each other!)

Anyway, aside from having the same first name and being born within two days of each other, Katie and I have an astounding number of things in common. We both find joy in absurd abbreviations (the shorter the abbrev the better, obv). We both think it’s hilarious when guys put on chapstick. And, we have pretty much the exact same taste in music.

Which is why whenever we text each other about a song or artist the other one HAS to listen to right now, we actually do listen to it right now. (Unlike when your vaguely annoying friend of a friend gives you a music rec and you reply that you’ll “totally listen to it as soon as I have cell service” and then conveniently forget forever.)

I have never not become completely obsessed with any music Katie has recommended to me. So, when she told me to listen to Jack Garratt, I happily obliged.

However, despite our long history of mutual music obsession, I was not prepared for the level of infatuation that Jack’s music was about to invoke. I think it is safe to say I am a changed woman because of the POSITIVELY TRANSCENDENTAL EARGASM that is his album, Phase.

Like, what even is he? Who gave him permission? Also, just how? HOW?!??

Okay, woah, I’m getting out of control again. REEL IT IN, SANTINO.

Instead of regurgitating all of the thoughts I had while listening to this glorious piece of work, I will instead direct you right to the source. Below are the texts Katie and I exchanged upon my first listen, in which I was having what in hindsight I am now able to diagnose as a “medium to severe conniption.”

Please note that I consider these deeply important records that document a crucial and highly impactful moment thusfar in my life.

Please also forgive the several times I misspell “Garratt.” Despite my unwavering dedication to grammar, this was simply not the time or place for it. 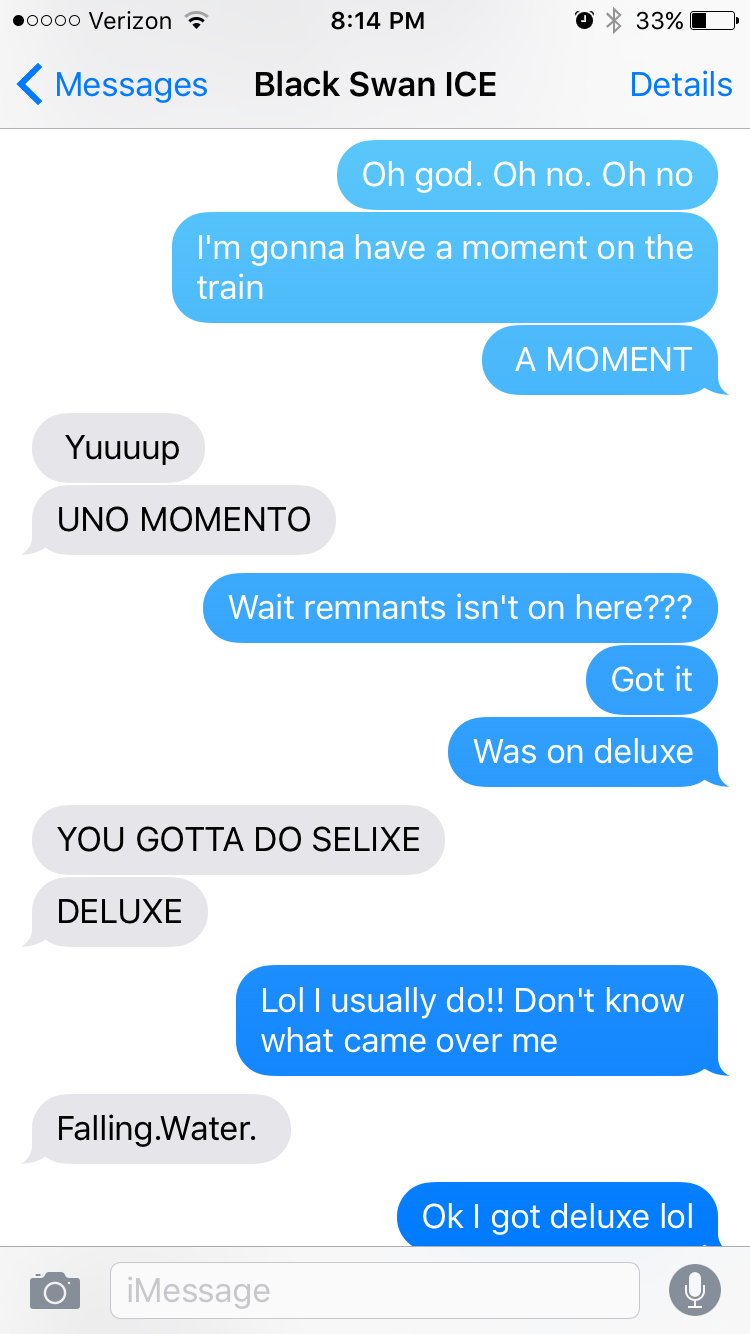 Note to self: ALWAYS GET THE DELUXE VERSION.

Here I am referring to Katie’s vast and ever-impressive knowledge of the New York City transit system. Seriously. The girl can get you anywhere you want to go. Train? Bus? Ferry? Pedi Cab? She’s gotchu. Hit her up.

Clearly, I was not kidding about publishing this. I am also clearly way to #humble for my own good.

I stand by my above assessment. Also, how rad would that family photo be? Can I be on their Christmas card list? AMIRITE?

Cut to a few hours later, when, like a stomach flu, my obsession with Jack re-emerged at full force after I thought I had gotten it all out of my system. 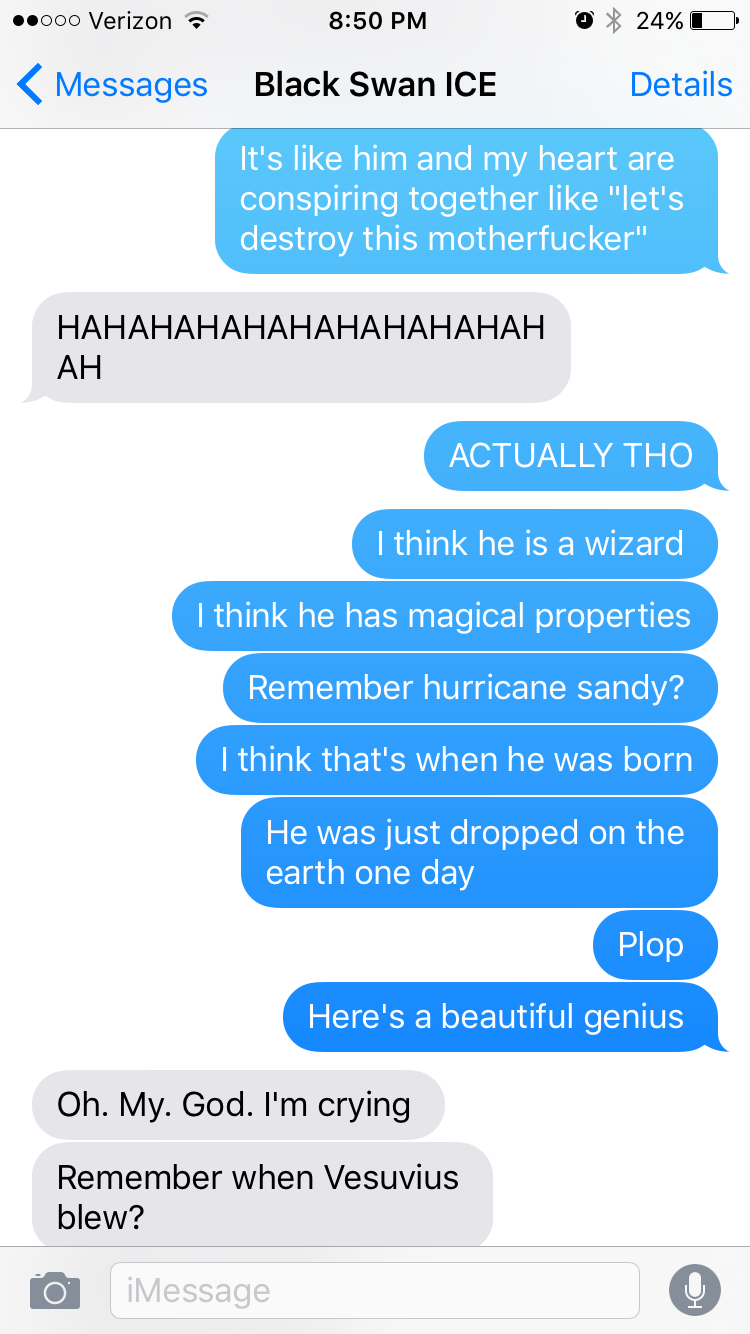 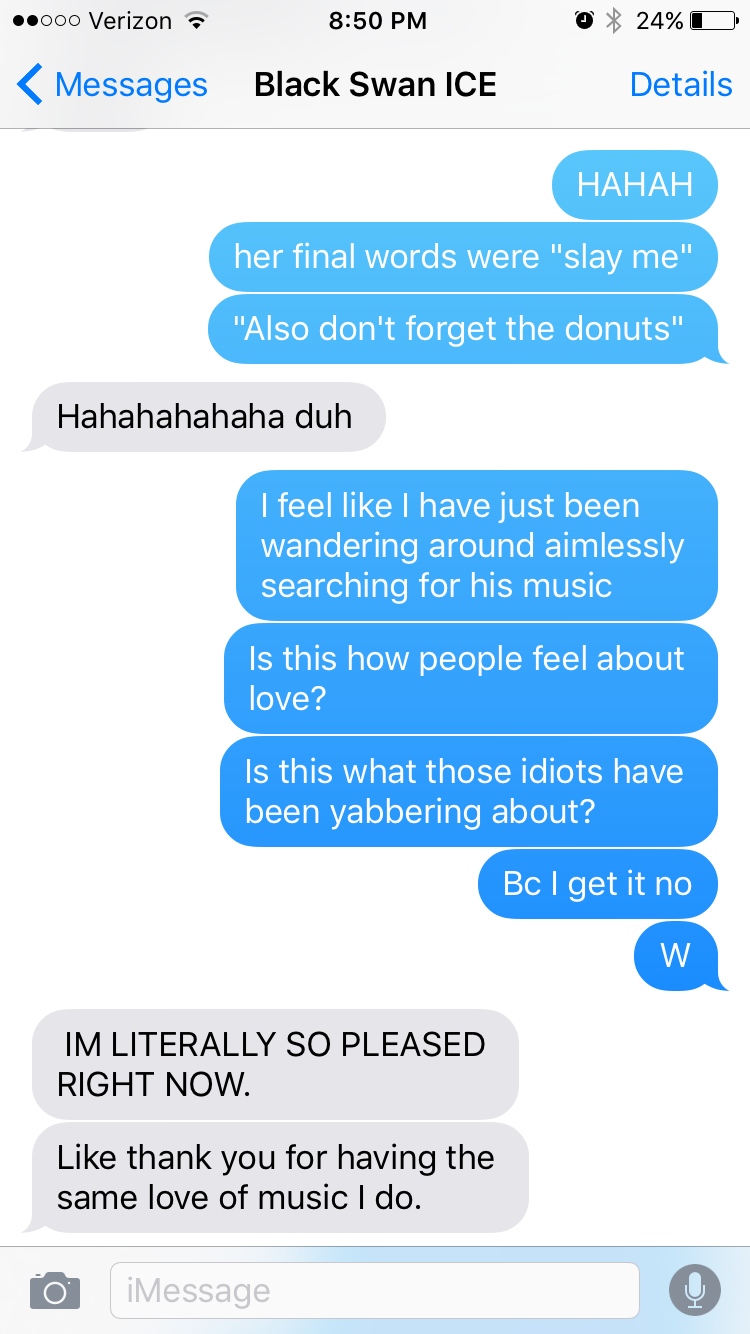 After this, our conversation likely turned into an exchange of Buzzfeed videos or pictures of Italian greyhounds (they’re just so POINTY).

Anyway, as much as I truly want you to listen to Jack Garratt and be equally as astounded by his brilliance, that’s not the only purpose of me writing this.

By now, you’ve probably noticed my tendency to, for lack of a better term, freak the f out over stuff that I like. This is not a recent development.

It’s the reason that I’ve gotten into actual fights with people over the cinematic value of Dreamgirls, why I call my mother while she’s in a meeting just to tell her about the prepackaged Brussels sprouts I’ve just discovered at Trader Joe’s, and why my friends and family are often the recipients of over-dramatic texts like the ones you’ve just read.

The point is, even if for some reason they’re not on my exact level of excitement, the people in my life will at least humor me (but let’s be clear, my mother is ALWAYS excited about my latest Trader Joe’s find. As she should be).

But more often than not, just as you’ve seen above, the humans around me easily reciprocate whatever crazy word-vomit I happen to be expelling upon them that day. And I’m realizing just how important that is – to have people in your life that just get you. To be able to share in the shit that you’re passionate about. It’s crucial.

Because I think we can all agree that there’s no better feeling in life than feeling understood, even when it comes to seemingly insignificant things like Jack Garratt’s album.

But seriously, go listen to it. Available now on iTunes.